We had visited the Westernmost point of Europe in Portugal (Cabo de Roca) a couple of years ago where there is an inscription of a quote “Where the land ends and the sea begins.” ….that reminded me that we have a similar “Land’s end” of the Indian peninsula thats more unique because its where a sea, a bay and an ocean meet….Kanyakumari.

We planned a trip here in the midst of the monsoon of July 2018. The great coastal drive from Trivandrum airport was very pleasant through the rain-blessed verdant coconut and banana groves and estuaries with birds, sometimes with a glimpse of the rugged sea.

We were greeted by a small shower in the morning as is typical in July and the sky was heavily overcast with clouds. When we reached Kanyakumari in afternoon, the waves were lashing, the ocean roaring in a fury and the waters so turbulent around us. All the fishing boats were safely docked on the shore.

As we boarded the ferry to the Vivekananda rock and I looked back at the shoreline, the words of the Great Swami spoken at the Parliament of Religions reverberated in my ears “I am proud to belong to a religion which has taught the world tolerance & universal acceptance. We believe not only in universal toleration but we accept all religion as true.”

Can you spot a church, a mosque and a temple in this picture that together reiterate even to this day his beliefs of 1893.

The Vivekananda Rock Memorial was built in 1970 in memory of Swami Vivekananda who is said to have attained enlightenment here. The Living memorial and the mandapams are worth visiting. The most interesting is the sundial and sunrise calendar (although we were totally devoid of any rays of the sun here that day !)

Just sitting by the sea and listening to the sound of the waves is a truly immersive experience here….Smell the sea and feel the sky. Let your soul and spirit fly… 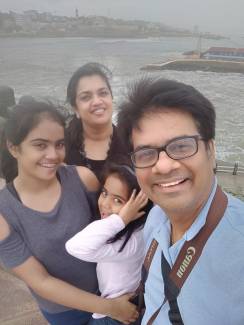 The Thiruvalluvar Statue in the memory of the the greatest poet of South India looms large at 40 metres and one can see people bathing in the Triveni Sangam or the holy confluence of the three great water bodies.

The billowing clouds engulfed the sky in the evening too so we really could not witness the sun set and the moon rise over three seas (Bay of Bengal, Arabian Sea, Indian Ocean) simultaneously. A morning walk to the pier in the hope of seeing the sunrise revealed just a streak of light at the horizon but a wonderful photo opportunity to capture the fishermen and fishing boats not really in a mood to brave the stormy waters around.

Based on the reviews we went to Sarvana restaurant for lunch looking for an authentic south Indian thali but found it very bland and not up to the mark especially the rassam. Dinner was a more satisfying fare at a smaller family run restaurant opposite Hotel Sangam called South Food Center and would recommend it. We stayed at the Seashore Hotel which definitely had the best view and a scrumptious breakfast.

Its a great feeling to have visited this “V” tip and southernmost point of the Indian Subcontinent which was definitely on my bucket list and I hope to visit more such iconic land’s ends as we wander the globe..Cape of Good Hope or Land’s End, Cornwall maybe….